Would you like to switch to the accessible version of this site?

Don't need the accessible version of this site?

The Little Kitten Who Could

Two stray cats were spotted in the village and, instead of animal control, my sister called me, the only veterinarian in the family. One was black, one was gray and they looked to be about a few months old. The gray one hungrily ate the fish we offered and ran back under the building. The other stayed, a little black ball in the bushes, not moving, eyes closed, ignoring the food, struggling to breath, and shaking.

It didn't take a vet to realize this little one was in trouble. Knowing it would be scared and could try to bite me out of fear, I took off my jean jacket and wrapped the kitten in it. We brought it to my sister’s house where I spoon-fed it warm sugar water, determined it was a female and realized her eyes were sealed by a crust of dried pus.  She was very thin, weak and dehydrated.

She was not going to last the night, was my worried diagnosis.

Nevertheless I was not going to give up on her. We put a space heater in the bathroom, wrapped her up and put her in a pet carrier. I slept uneasily. I had to get up and check on her. Still alive, I gave her more sugar water.

She survived the night. 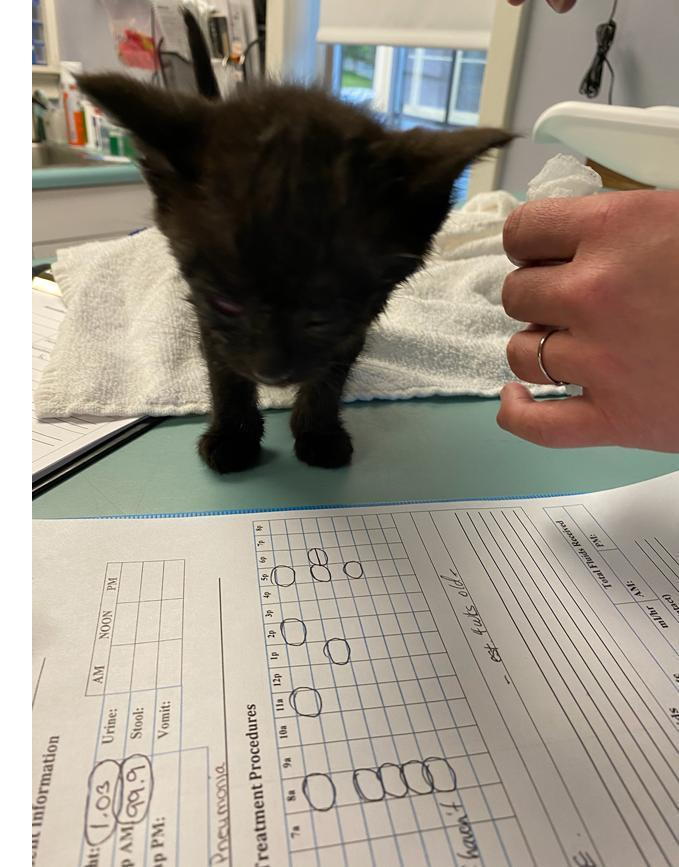 The next day I brought her back to my clinic, Just Cats. I began a treatment of subcutaneous fluids, antibiotics, eye medication, and intensive care recovery food, nursing her throughout the day. Fearing the possible rabies, I would not let my staff treat her. That night I placed her in a heated and oxygenated cage. With video capabilities I was able to monitor her remotely.

She survived her second night!

She was still struggling to breath and still not eating on her own. I continued to treat her in the oxygen cage where she could be nebulized with concentrated medication, given treatments and hand fed. As she continued to improve, we had ruled out rabies and the rest of my staff enthusiastically joined in her care.

She survived her third night.

While she was still barely moving, her eyes were physically improving. A small triumph! Half of the whites of her eyes were still covered by an infection. She did not follow hand motions and I was fearful that the infection had permanently damaged her eyes. She might be blind.

However, she was now eating on her own. 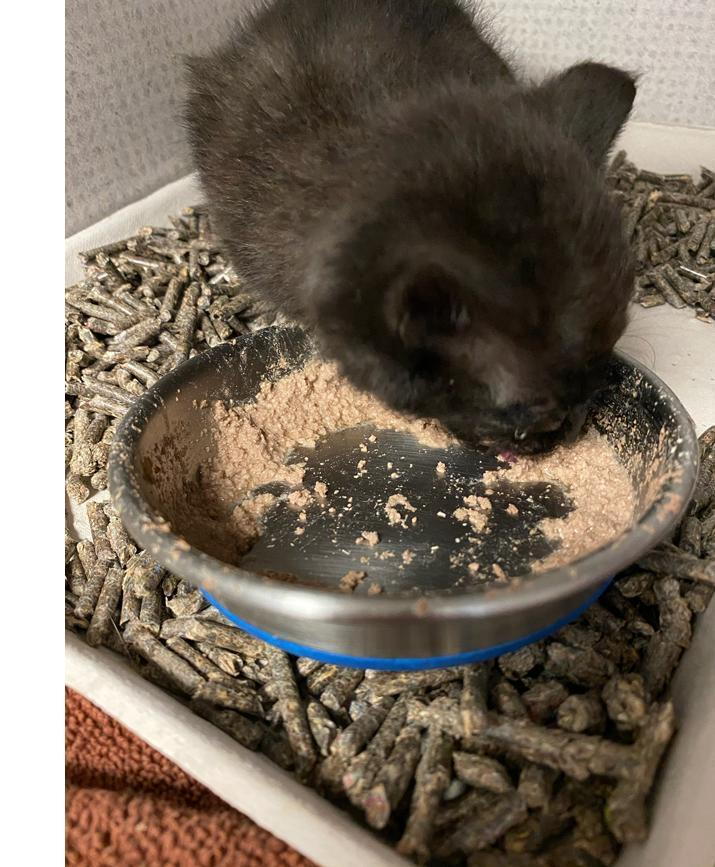 Through perseverance her condition continued to improve. One morning, I approach her cage, she follows my hand with her eyes and she can see!

She is now a sweet and playful kitten who purrs like crazy when touched and eats well. She still has some residual breathing noise and her eyes are not quite normal, but our little miracle kitten is truly that, a miracle.

Whoever gives her a home, and a name, will be getting a determined kitten full of good fortune and love. In early June, the little kitten that could was adopted by Julia Mallalieu, a long time client and supporter of Just Cats. It sounds like she is now a typical rambunctious kitten.

“It is somewhat hard to relate to the tough journey this kitten has had given the terror that has been racing around our house for the past three hours,” says Julia, with a laugh. “She really is a darling though (when she is asleep)!”

She is enjoying her lovely new home, thanks to Julia. Her name is SuzieQ, after her namesake Dr. Susan Sikule.